Zenfotec > Blog > IT Career > Why should you learn Python Programming?

Why should you learn Python Programming? 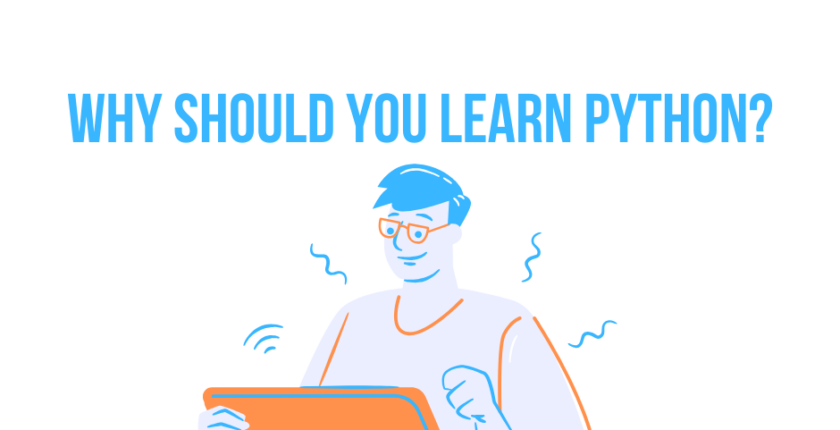 To 10 reasons or benefits of learning Python Programming Course.

In 2016, Python replaced Java as the most popular language in colleges and universities, and since then, it has never looked back. Python Programming is growing and growing big time. If you read programming and technology news or blog post, then you might have noticed the rise of Python as many popular developer communities, including StackOverflow and CodeAcademy has mentioned the growth of Python as a dominant programming language.

Python is growing, Ok, that’s great, but it doesn’t mean Java is going down or C++ is declining.

For beginners, it’s simple, start with Python Programming because it is easy to learn and powerful enough to build a web application and automate the boring stuff.

Actually, a couple of years back, scripting was the main reason for learning Python, and that was also the first and foremost reason I attracted to Python and preferred it over Perl, another popular scripting language of that time.

For experienced programmers or someone who already know Ruby, Java, or JavaScript, learning Python means acquiring a new and powerful tool in your arsenal and I have yet to come up with a programmer who says no to a tool, and that’s the right way to look when you learn a new programming language.

Python gives you the ability to automate trivial stuff, and let you focus on more exciting and useful things. If you are a Java developer, you can do that with Groovy as well, but Groovy doesn’t offer you what Python in terms of its wide reach in APIs, libraries, frameworks, and domains like Data Science, Machine learning, and Web Development.

And, if you already made your mind to learn Python in 2020, then there is no better way to start than joining The Complete Python Masterclass on Udemy.

Though the questions depend upon who is asking that, i.e., for a beginner, learning Python makes sense because its foremost and straightforward reason for learning Python is simplicity.

Anyway, without any further ado, here are the top 10 reasons to learn Python in 2020:

But, what makes Python a preferred language for Data Science and Machine Learning? Didn’t R was considered best for that not too long ago? Well, I think the libraries and framework Python offers, e.g., PyBrain, NumPy, and PyMySQL on AI, DataScience, and Machine learning, are one of that reason.

Another reason is diversity, Python experience allows you to do a lot more than R, e.g., you can create scripts to automate stuff, go into web development and so much more.

2. Machine Learning
This is another reason why programmers are learning Python in 2020. The growth of machine learning is phenomenal in the last couple of years, and it’s rapidly changing everything around us. Algorithms become sophisticated day by day; the best example is Google, which can now answer what you are expecting.

If you are interested in machine learning, want to do a pet project, or just want to play around, Python is the only major programming language that makes it easy.

Though there are machine learning libraries available in Java, you will find more content around Python as the developer community is preferring Python over anything else on Data Science and Machine learning.

3. Web Development
Proper old development is another reason for learning Python. It offers so many useful libraries and frameworks, e.g., Django and Flask, which makes web development really easy.

The task which takes hours in PHP can be completed in minutes on Python. Python is also used a lot for web scrapping. In fact, there is a free Python course on Udemy, which will teach you that while teaching Python.

There are a lot of using Python web development frameworks like Django and Flask, which can help you quickly create your web application in no time.

4. Simplicity
This is the single biggest reason for beginners to learn Python. When you first start with programming and coding, you don’t want to start with a programming language that has robust syntax and weird rules.

Python is both readable and simple. It also easier to set up; you don’t need to deal with any classpath problems like Java or compiler issues like C++.

Just install Python, and you are done. While installing, it will also ask you to add Python in PATH, which means you can run Python from anywhere on your machine.

5. Big Community
You need a community to learn new technology, and friends are your biggest asset when it comes to learning a programming language. You often get stuck with one or another issue, and that time, you need a helping hand.

Thanks to Google, you can find the solution of your any Python-related problem in minutes. Communities like StackOverflow also brings many Python experts together to help newcomers.

6. Libraries and Frameworks
One of the similarities between Python and Java is the sheer number of open source libraries, frameworks, and modules available to do whatever you want to do. It makes application development really easy.

Just imagine creating a web application without Spring in Java or Django and Flask in Python. It makes your job simple as you only need to focus on business logic.

Python has numerous libraries for different needs. Django and Flask are two of the most popular for web development, and NumPy and SciPy are for Data Science.

7. Automation
When I first come to know about Python was due to one of my scripting needs. I was working with an application that receives messages over UDP, and there was a problem, we did not see messages in the log.

I wanted to check if we are receiving any UDP traffic on that box and that port or not, but I couldn’t find a handy UNIX command to do that. My friend, who sits next to me, was learning Python, and he wrote a utility in just 5 minutes to intercept UDP messages using one of the Python modules.

Obviously, I was impressed with the time it took for him to write such a tool, but that just highlights the power of Python when it comes to writing scripts, tools, and automating stuff.

8. Multipurpose
One of the things I like about Python is its Swiss Army knife nature. It’s not tied to just one thing, e.g., R, which is right on Data Science and Machine learning but nowhere when it comes to web development. Learning Python means you can do many things.

You can create your web applications using Django and Flask, Can do Data Analysis using NumPy, Scipy, Scikit-Learn, and NLTK. At a bare minimum, you can use Python to write scripts to automate many of your days to day tasks.

9. Jobs and Growth
Python is growing really fast and significant time, and it makes a lot of sense to learn a growing programming major programming language if you are just starting your programming career.

It not only help you to get a job quickly but also it will also accelerate your career growth. IMHO, for beginners, after simplicity, this should be the most important reason to learn Python.

10. Salary
Python developers are one of the highest-paid developers, particularly in Data Science, Machine learning, and web development. On average, a Python Programming Consultant, are in a very good-paying scale, ranging from 70K USD to 150K USD depending upon their experience, location, and domain.

Drop you query and we will get back to you at the earliest.